These 2 mixed media collages were submitted to Xavier Vasquez for the Fall 2019 edition of his zine entitled Magagagaga Zine, which premiered during SD Zine Fest at Bread & Salt. He also hosts Axiom Sound System with Andromeda Breeze. Radio Axiom and The Axiom Sound System are live internet radio and live in-person events in and around San Diego. He also runs an art studio called Studio 6608 in the SDSU area of San Diego.

My ideas for these pieces were directly connected to the article that accompanied them in the zine which was written by my partner Bobby Bray. 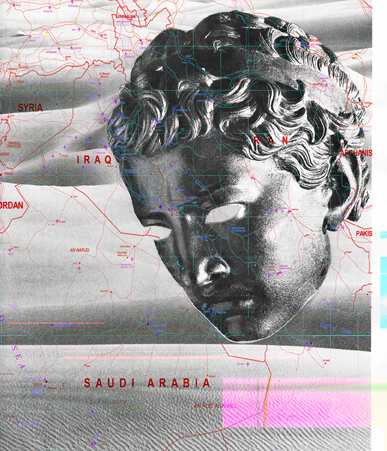 I also entered a photo (from a series) to accompany one of the topics being discussed. I think that the set of 6 photos has such a dramatic impact and will hopefully allow those who do not live in this region to get a better idea of what life is like traveling between Tijuana, Mexico and San Diego, California. If you visit Friendship Park in Mexico you’ll find it is a calm and peaceful place where friends and family come to visit. There are shops and restaurants and some cool art installations and murals.

On the other side of this fence in San Diego is Border-field State Park — it is completely the opposite. You must walk about 1 mile from the designated parking area to get to the beach, then once at the beach another 1/2 mile or so to get to the fence which is consistently watched by border patrol agents. They will not allow you to go with in 100ft of the fence, except once a week on Sundays where people from both sides are allowed to speak with family or friends or any person who may not be able to cross the border for whatever reason.

I became savvy to this information because we attempted to walk all the way to the fence at which point a border patrol squad car used his loudspeaker to tell us to stop. We then walked up to the border patrol’s vehicle and asked them what was going on, at which point they explained the once a week rule to us.

The impact on me of the graffiti, murals, and fabric collages at Friendship Park in Playas, Baja California was something I will never forget. The fence on the Mexican side, where Friendship Park is, changes daily.  I have been there several times but I have never seen anything as powerful. The image used in Magagagaga Zine is the top left that has an American flag with the words “Absolutely No Stars” sewn into it — this pretty much sums it up for me because I could not agree more. 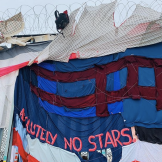 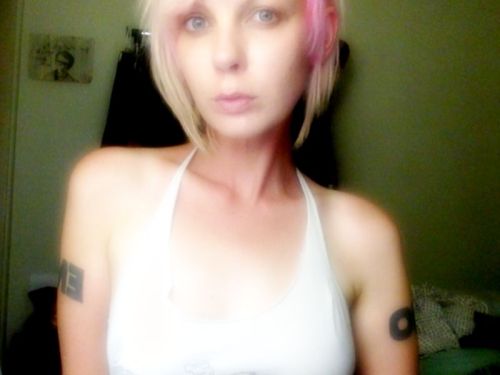 Below are the images I contributed:
“In An Expression of the Inexpressible”
-paper collage

Posted in and then, collage, life actually

A few bedroom shots from my last visit at with MaiLing at Cocoon Hair Studio.

Posted in and then, for your ears., life actually 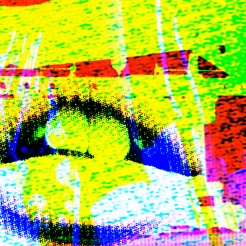 Posted in and then

Posted in for your ears. 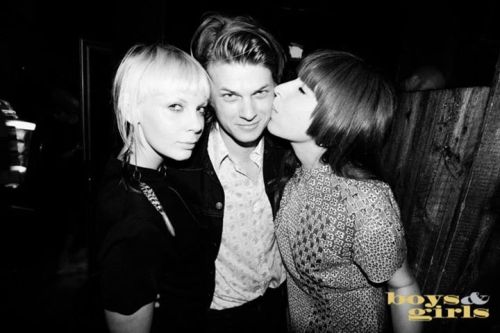 Posted in for your ears., life actually

“Having emerged from hiatus at the end of 2010, GYBE picked up right where they left off, immediately re-capturing the sound and material that had fallen dormant in 2003 and driving it forward with every show of their extensive touring over the last 18 months. The new album presents the fruits of that labour: evolved and definitive versions of two huge compositions previously known to fans as “Albanian” and “Gamelan”, now properly titled as “MLADIC” and “WE DRIFT LIKE WORRIED FIRE” respectively. Accompanied by the new drones (stitched into the album sequence on CD; cut separately on their own 7″ for the LP version), GYBE have offered up a fifth album that we feel is as absolutely vital, virulent, honest and heavy as anything in their discography. ”
– Constellation Records

Posted in for your ears.

“This is it, the final Makeout!
Thats right, on the 3 year anniversary of weird, this is the last installment!!
Happening Thursday, April 18 at Whistle Stop Bar

We are super excited Maniqui Lazer will be playing!! After an extended hiatus, this trio of weirdos,

originally from Mexicali, is just beginning to freak people out in person again. Their mix of experimental electronic dance-punk has already made a mark on the face of subculture and they are back in full force! Members include Valentin Torres of Vampire Slayer and Jung Sing, the wildly drummer of the now disbanded All Leather. Jung and Manaqui Lazer bassist Rodo also play in a band called Black Cells.

We are also very pleased Machino will be part of the night! – A previous member of the post hardcore band Mae Machino and the DJ duo Loud Noises. His electronica offerings have hit Beatport’s charts more than once. We are looking forward to his experiments!

The three amigos of Moonshake will be manning the DJ booth into the night! These are the cats that ran the long running Moonshake parties at Kadan, before the bar closed down. Lee Reynolds, Mark E. Quark, and Dazzla are masters of dance party shenanigans!! Prepare for “an adventure into future disco, spacey house, and techey grooves!” –Bobby Bray SD Reader